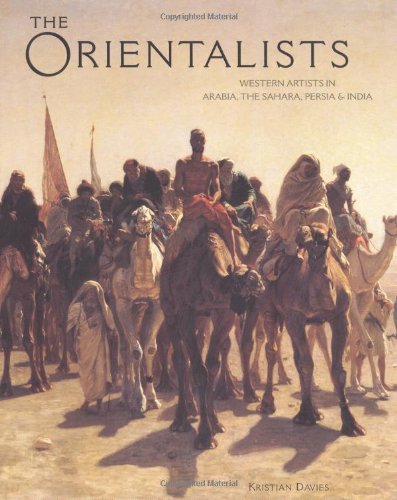 Orientalists: Western Artists in Arabia, the Sahara, Persia and By Kristian Davies

This book was published in 2005 and has been a true gem in my collection. One of the reasons that I like it so much is that Mr. Davies not only provides beautiful images of paintings that have been hidden away in private collections, but he also weaves facts with his own travel experiences. Rather than solely concentrating on one artist and offering the usual biographic material, he talks about the paintings and what makes them so special. You can look at excerpts of the book through Amazon.com

I am often told that I tend to be a dreamer, an idealist, etc. and when I read this all I could say was: "A-ha, someone else has noticed and shares my sorrow..."

"What is this desire to see exotic parts of the world in exactly the way they were before modern culture sopped them? When I traveled to the Southwest and seen Navajo and Pueblo Indians dressed in a mismatch of traditional and contemporary clothing. I have always regretted in a very Western fashion this corruption and wished there had never been such a poisoning by American monoculture. Then this desire would make me feel guilty, for there is a curious Western need to go to foreign places and see people dressed as they were long ago, as though this world were but a backdrop in one's personal movie. One can go to the Middle East today and see blue jeans and American movie marquees, and hear American music, and feel a painful twinge that American mass-media culture has irreversibly drowned the world." (Excerpt from book P 31)

I have lived through this Westernization in the 70's, while living in Iran and like all teenagers at the time, I was thrilled to have access to things from the Western World. As an adult on the other hand, having travelled not only to the Middle East, but Asia as well, I have found it very sad how western-monopolies have changed other cultures. When you are in Tokyo, Singapore, Bali, etc. and you see Kentucky Fried Chicken, Starbucks and Mac Donald's sprinkled around the cities like confetti, you realize that they have replaced the little mom and pop operations that used to offer the traditional cuisine of that country. That only being the most obvious aspect of how the West has been changing the East. When westernization occurs, there is a loss of cultural identity and uniqueness. In my case, I think this is why I feel this need to capture in paint the little that is still unique to the Middle East in particular. Let's just hope I can learn to paint faster, while there is still time....