When I was in fourth grade my parents decided to leave Vienna and move back to Tehran, Iran. With me and my younger brother in tow, we were all greeted by a swarm of relatives at the airport. Between the loud, joyous embraces, the kisses and the numerous pinches on the cheek, I thought our family must be very important to receive such a royal welcome. 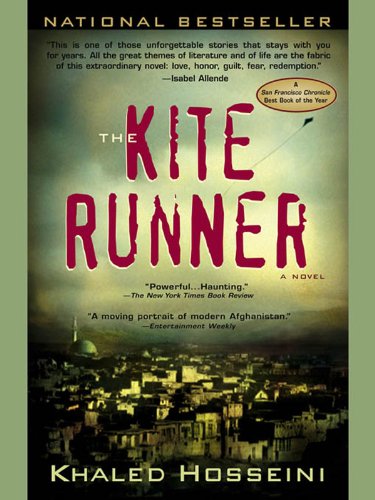 The Kite Runner By Khaled Hosseini

I loved living in Tehran, beautiful landscapes, great weather, friendly people and lots and lots of relatives. Although me and my brother could barely speak the language, just like many other children we adapted and soon made many friends. Besides my classmates from the German School in Tehran, my brother and I also befriended many other kids in our neighborhood. Kids, who belonged to the neighborhood grocer, the gardeners, the cooks and the servants.

When I read "The Kite Runner", I was transformed back in time and started to remember these children we used to play with. The Iranian kids that did not belong to family or school, were in a different category. They tended to be the ones who stayed in the background, always eager to please, rushing at every opportunity to play with the "farangi" ( the foreigners). Yet, when it came to birthdays, these kids never quiet made it on the birthday list. They were our friends, yet they weren't....

Amazing how as a child you wonder why you can't have so and so at your party, give this oddity some thought, can't explain it and rush off to do something else. Yet, many years later, as you read a book about two playmates, this little seed of wonder resurfaces, it makes you wonder how these kids must have felt being always on the sidelines of the lives of children that were more privileged than them. All I can think of is that I hope life has been kind to them.

This is one among many different aspects of the nature of man, that Mr. Khaled touches upon. I won't give the story away, but I can easily say that this book is wonderfully written and captivating. I finished it in two days!

This is a synopsis from Mr. Khaled's site:

Over two years on the New York Times bestseller list, and published in 42 different languages.

Taking us from Afghanistan in the final days of the monarchy to the present, The Kite Runner is the unforgettable, beautifully told story of the friendship between two boys growing up in Kabul. Raised in the same household and sharing the same wet nurse, Amir and Hassan nonetheless grow up in different worlds: Amir is the son of a prominent and wealthy man, while Hassan, the son of Amir's father's servant, is a Hazara, member of a shunned ethnic minority. Their intertwined lives, and their fates, reflect the eventual tragedy of the world around them. When the Soviets invade and Amir and his father flee the country for a new life in California, Amir thinks that he has escaped his past. And yet he cannot leave the memory of Hassan behind him.

The Kite Runner is a novel about friendship, betrayal, and the price of loyalty. It is about the bonds between fathers and sons, and the power of their lies. Written against a history that has not been told in fiction before, The Kite Runner describes the rich culture and beauty of a land in the process of being destroyed. But with the devastation, Khaled Hosseini also gives us hope: through the novel's faith in the power of reading and storytelling, and in the possibilities he shows for redemption.

Mr. Hosseini has a very nice web site and blog here and his book can be ordered through Amazon.com Update Portrait of a Poodle Named Stella is Finished It's a bit crazy at the moment with a lot of portrait commissions that need to get painting. I am currently working on t
Read More
Back to blog
PREVIOUS *** NEXT
* “As an Amazon Associate, I earn from qualifying purchases.This page might contains affiliate links, therefore if you choose to purchase after clicking a link, I may receive a commission at no extra cost to you.” *