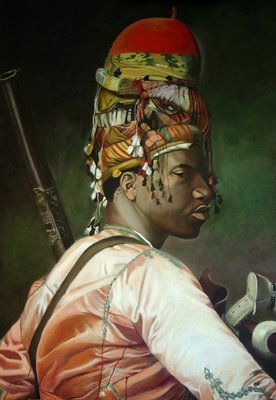 Jean Leon Gerome was a French Academy Painter (1824-1904) who became well known for his paintings of Oriental themes. As a young art student he started his career by submitting his paintings to the Salons. Upon winnign awards he did official commissions and painted portraits of the elite. After the Napoleonic wars more and more painters turned to the Near East for it's warmer climate and beautiful, exotic sceneries. Gerome got caught up in that craze as well and travelled on several occasions to places such as Egypt, Syria, Algiers, and Israel. He became so enamored with the people, architecture, scenery, customs and clothing that he faithfully recreated many of the things he saw, in his paintings. His paintings are full of details and he is a true master in creating a sense of space and time.

As a portrait artist I have looked for inspiration at William Bougerau, for his beautiful handling of skin tones, but as a person of middle eastern background and one who has been fortunate enough to experience it's many muticolored facets of live, I hope to follow in Gerome's footsteps and create paintings that ones more make the East not a place of hatred but a place to be admired.

I have started on a new puppy portrait of an Australian Shepherd.This will be an 8x8in oil portrait and the slide show s
Read More
Previous Post Next Post