When you live in California you also live with the worry about when the next earthquake will hit and whether or not you are prepared to face a disaster situation. I wish I could say I am all organized, but besides having a backpack in each car containing a first aid kit, tennis shoes and a roll of toilet paper, yes you heard right the latter is apparently very important, I am still not stocked up. There is still a lot that needs to be done and I am working on it.

So on the never ending quest of prepping for that day, I have asked to review solar rechargeable lanterns. One thing we have plenty of in California is sunshine, so going solar makes a lot of sense. I also like things that can multi task and don't weigh a ton.

The Bulldog LED Solar Rechargeable Lantern is a collapsible compact solar rechargeable LED lantern. It has a 800mah internal rechargeable battery which can be recharged by either solar power or plugged into an AC outlet. It can also run on 3 AA batteries which are not included. It also has a USB plug which can power a cell phone in an emergency situation, but it can not charge a cell phone. 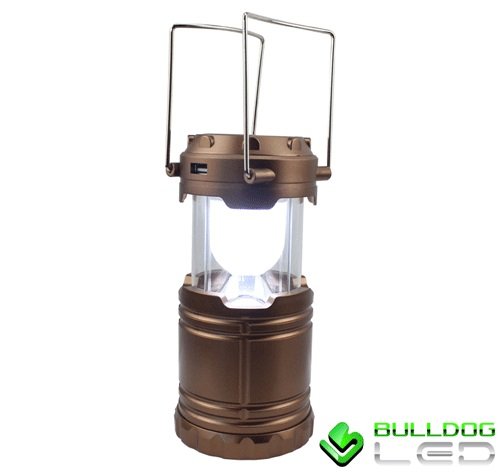 The lantern is easy to operate and gives off a lot of light for it's small size. The price is good too, at $10.99 I can buy one for every family member. A red LED light indicates when the lantern is recharging by either solar or AC power. If internal battery gets low you can use 3 AA batteries (batteries not included) or the AC power cord, which is included. The light weight lantern is made of ABS plastic, and really packs a punch at 100 lumen.